Yes, there is a royal wedding this Saturday May 19th, but it is also the night of the 10,000 PBs, held at the Parliament Hill athletics track in the southeast corner of Hampstead Heath. Given that London is currently experiencing an Indian summer (albeit quite an erratic one), any athletics enthusiast – and anyone remotely interested in running, for that matter – would do well to spend their downtime at this event rather than sat in front of a TV. If you simply cannot miss the wedding, streaming it on your phone trackside is always an option.

Created in 2013 by Highgate Harriers as a ‘celebration of 25 lap running’, the night of the 10,000 PBs has quickly become a landmark fixture on the athletics calendar, its aim being to ‘improve British racing standards and [make] 10,000m aspirational’. Not only does it draw a wide range of talent, it also attracts fervent crowds and as such plenty of entertainment, food outlets and licensed bars. The ensuing atmosphere isn’t merely a by-product of exciting races; it is the very ethos behind the event. The website states that ‘race atmosphere was seen as pivotal to assisting performance and therefore enhancing it became the mission’.

In testimony to its rapid and ever-increasing popularity and prestige, the event was combined with the English championships in 2014, followed by the UK championships from 2016. This year’s event will be combined with the European Cup 10,000m team competition: 99 top-level athletes from 25 countries will be competing at the foot of Parliament Hill. Many will be racing to qualify for the Berlin European Athletics Championships in August. Brit Ross Millington – 31st at the Rio Olympics – is the only entrant with a sub-28 lifetime best (27:55.06).

To this day, the night of the 10,000m PBs successfully combines amateur running and high-level championship racing: the first race is at 1pm, with the afternoon gradually building up to the championship races starting at 7pm. At 5pm spectators will be treated to an RAF typhoon flyby (!), followed by a talk and Q&A from 5 time-Olympian (and winner of the women’s event in 2014), Jo Pavey, at 6pm. Have a look at the flyer below for more details of the sort of entertainment that contributes to making this a completely unique athletics fixture.

This event is really not to be missed. However, try to get there early; although spectators will be close to the action (the two innermost lanes are used for racing, with the rest available for spectators to cheer on competitors in the name of #Lane3BeerNCheer), it cannot be overstated how popular an event it is and good viewing positions will certainly be at a premium.

Oh, did I mention it was free? 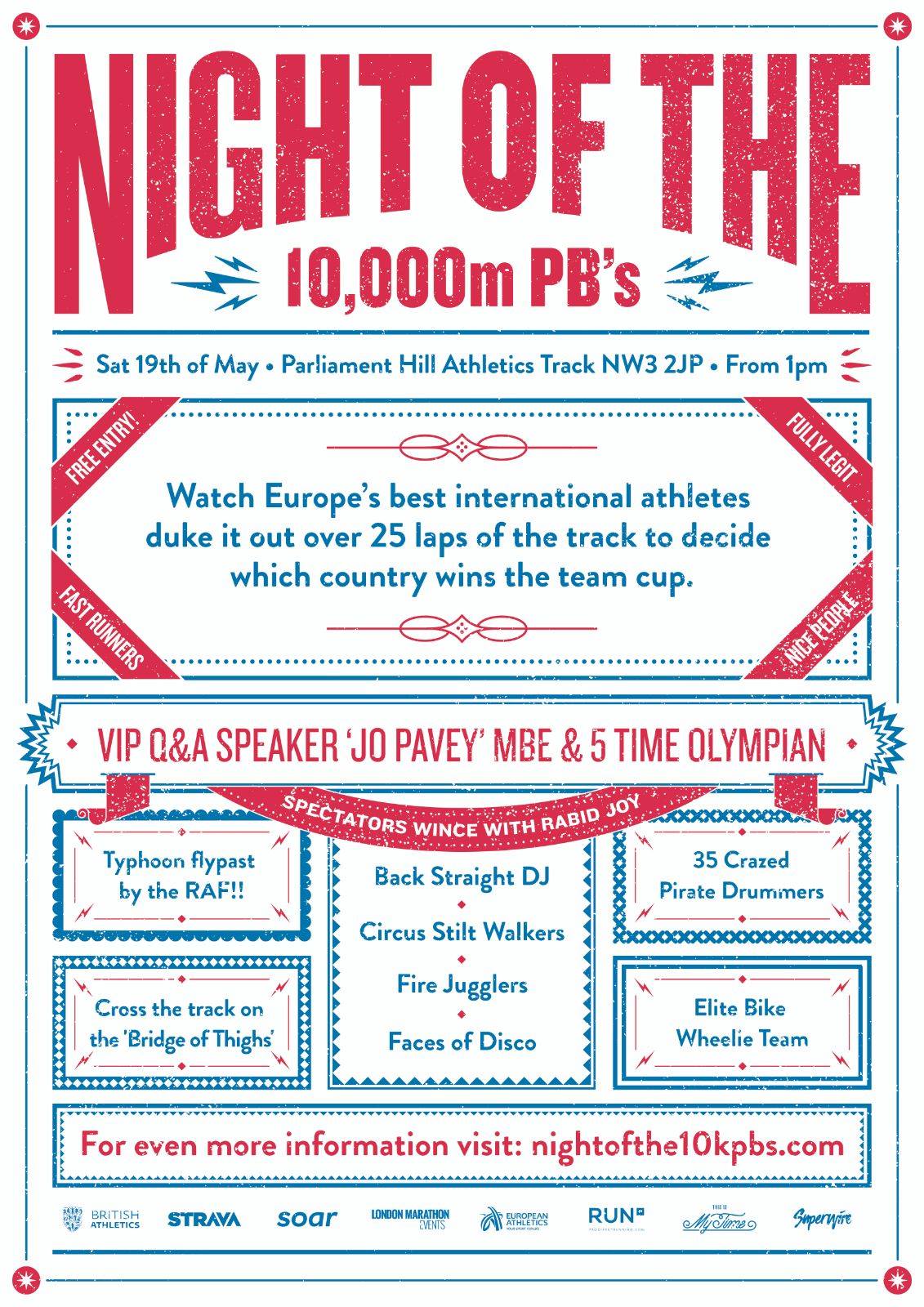 Race: Parliament Hill LUCA London Colleges League race What is it: Part of a cross-country series run by LUCA for all students from London universities – more details at http://www.london-athletics.com/lcl/ When is it: Wednesday 19th October at 3p.m. Where is it: Parliament Hill, Hampstead Heath – the start is to the right of the athletics track Who is it for: Any student from a LUCA member club, it doesn’t matter whether you’re trying out cross-country for the first time or are well-acquired with extensive amounts of mud already! How far is it: Around […]

Hundreds of athletes journeyed to Sheffield on the 11-12 February 2017 with the hopes of being crowned British Champion and securing a place on the British team for the European Indoor Championships. In the preceding week, as athletes were confirming their attendance, questions were being asked: Would defending champion, Andrew Pozzi, current world lead, reclaim his men’s 60m hurdles title? With the absence of Dina Asher-Smith, how would Asha Philip fair in the women’s 60m? Is Katrina Johnson-Thompson the new Jessica Ennis and Britain’s heptathlon superstar? Carry on reading to […]

One week to go before the LUCA Indoor Competition!

With the Cross Country season now in full swing, get ready for the first Track & Field competition of this academic year! The 2nd annual LUCA indoors event, hosted by the Lee Valley Athletics Centre, will launch the beginning of the track competitions for this 2016 – 2017 season. UCL won the last Indoors and Outdoors LUCA competitions and have set high standards for the season ahead. This athletic year promises a tougher fight and UCL will have to be even better to keep the highly coveted crown on Jeremy Benthams’ head […]