In September last year, I discovered that the IAAF World Athletics were taking place in London in 2017. After hearing great things about the volunteering experience at the 2012 Olympics, I was keen to apply to be a ‘Runner’ (the name given to all the volunteers).

My application went in and, just before Christmas, I was invited to an interview. I didn’t know what to expect, but the interview turned out to be friendly and informal; a mixture of group tasks and one-on-one questions. With my experience as an athlete and two years as the LUCA Officials’ secretary, I had a lot to say about student athletics.

After a few months of silence, I received the glorious email – I had been chosen to be a Runner and would be working as a ‘Starting Block Team Member’. The next step was attending training in late June, held in the Olympic park. By then, the excitement for the championships was beginning to take hold, with most tickets already sold out and the promise of final glory for Mo Farah and Usain Bolt’s races. I left the training day unsure to what my role involved, apart from lifting the blocks at some point, but I was excited to get stuck in and soak up the atmosphere at the Olympic park. The other vital information was about the volunteer kit: full Asics gear in a delightful shade of bright pink!

While slightly disappointed to have only been assigned two shifts (on the first Sunday and Monday), I rejoiced in the thought of getting more time to watch all the action. After picking up my uniform the day before my first shift, I turned up to check-in. I knew it was the night of the women’s 100m final and was thrilled to be assigned as a lane marker for the 100m start. We did a practice run, which was more complicated than you’d think. This involved learning to quickly arrange ourselves into the right order and hold the markers in the correct way. For the 100m start, you can leave the blocks out between the races, so we only had to put them out and in again twice in total over the whole evening. This left free time to watch the races, and I was able to catch the last event of the heptathlon (the 800m) where Briton, Katarina Johnson-Thompson, ran an inspiring race.

Then, after we placed the markers for the 100m final, we stood behind the scenes to watch. This gave me a unique perspective on the race as we saw all the finalists doing their preparations, including: Jamaican athlete, Elaine Thompson, Dutch athlete, Dafne Schippers, and of course the new champion from the US, Tori Bowie.

My next, and sadly final, shift gave me a change of scene as I moved to the 400m start line and was assigned responsibility for the lane 5 track marker for the evening. The great thing about this was getting to sit trackside for all the races, as you had to run onto the track to take the marker away just after the gun goes. Being so close to the start and finish was exhilirating – I saw the women’s 400m hurdle heats, men’s 400m hurdle semi-finals, and women’s flat 400m semi-finals. There was strong competition in all the races and great British performances from Eilidh Doyle, Jack Green, and Zoey Clark. 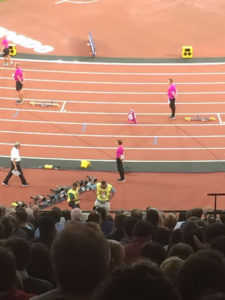 After the races were finished I was lucky enough to find a seat and watch Laura Muir’s heart-breaking 1500m, where she fell short of third place in the last few seconds. This brought an end to my time as a Runner, though I continued to watch the rest of the competition. I was glad to have been a part of this great championship, and experience first-hand the unforgettable thrill of the world athletics competition.

If you’re interested in volunteering, why not start out by volunteering with LUCA – there are a range of roles that will help you learn about all the tasks involved in organising an athletics competition, no previous experience necessary. It also helps to have this experience when applying for a role at a bigger event!

Festive Fun Run open to all!

Blue skies and smiles for first ever London Students’ Run

Last Sunday, 121 students came down to run 5 or 10 kilometers around the Queen Elizabeth Olympic Park. The sun was out for the day, which made the race an ideal way to spend a Sunday morning. This was the first ever edition of the London Students’ Run and what a success it was. England Athletics supported the event which was sponsored by Cafe Football. Check our Instagram feed for all the photos from today's @LUCA_athletics students run !! pic.twitter.com/ad2WlyS7hP — The Run! Project (@RUNLondonEA) December 4, 2016 Even though […]

Britain to challenge America in new 2018 athletics competition in London

Athletes representing GB and the USA will go head-to-head in a new competition to be held at London Stadium next summer. The competition, called ‘The Meet’, will see top athletes from the two countries compete across nine events in a two-hour window at the London Stadium on July the 21st. […]