“Britain’s toughest event”, “World’s most demanding course” and perhaps my favourite, “a hardcore race to challenge the toughest of the tough”. There seem to be plenty of tough races out there, each one claiming to be tougher than the last. Some can be completed in a morning with a quick dunk in a muddy pond and climbing a few walls; others take much longer. But surely they can’t all be tougher than each other in a never ending circle of toughness?

Well the circle of toughness must end somewhere, and it does. Badwater, UTMB and Marathon des Sables are some races to check out, but what other brutal races are there out there? Here’s my podium list:

This spine chillingly brutal race runs along the entire length of the Pennine way, the grandfather of all UK national trails, starting in Edale in the Peak District then snaking 268 miles to the Scottish border at Kirk Yetholm. Sounds like a bit of a long way doesn’t it? As if the distance isn’t hard enough, the race also takes place in January, a month of long dark nights, horizontal blizzards and howling gales.

It will often take hikers 14 days to tramp along the Pennine way so imagine doing it all in one hit, non-stop.  This year, the weather was slightly kinder to those foolish enough to set out, making for boggy conditions instead of the icy cruel winds seen in previous years. The race record stands at 99 hours and 17 minutes. That’s pretty fast when you consider the challenges thrown at the competitors: hypothermia, sleep deprivation, wind blindness and simple exhaustion all take their toll. 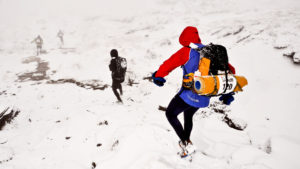 There are some difficult races, and there are some crazily difficult races. But then there’s this race, which is just crazy. Simply bonkers. It starts with its unorthodox entry process where you submit an essay on why you should be let in, and  the route changes year on year with no-one quite sure how far it is. It has actually previously taken years for someone to finish the race. The entry fee is a license plate from your home state or country and you must rip out a page from a book at each of the checkpoints to prove you’ve done it. Only 14 people have ever finished this race with many editions of the race ending with not a single finisher.

Want to learn more? Watch “The Barkley Marathons: The Race That Eats Its Young”

Navigation, easy. Elevation, none. Mental stimulation, somewhat lacking. Running tracks are boring. Anything more than 20 minutes is enough to make me wish I was anywhere else. So imagine running round one for an entire day. The same 400 metres, round and round you go. Sometimes they change the direction just to give your legs a change of direction. They’re easy races to prepare for logistically, often easy to drive to, and you’ll be passing your car every lap. But the views can be mundane to start with and after 24 hours of seeing the same thing you may start to question your sanity – if you hadn’t already.  Tempted? 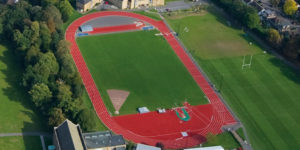 330km is a long way, and 24,000 metres is a lot of climbing and 70 hours is a long time to go without sleeping a wink. You don’t need to forgo sleep to finish, but if you want to win this race you’ll need to keep going no matter what. Competitors have a week to finish but more than a third won’t reach the end. The refuges dotted along the route dish out plenty of food and heavy banter, but you’ll need more than spectator support to get you to the end. Got four minutes to spare? Watch this beautiful race video:

If any of these races have whetted your appetite but you’re not quite sure where to start, there are some brilliant resources out there designed to bring all the ultra races together. You don’t need to start big or fast.

If you want to be running by mile 30, start walking at mile 3.  For international races and some pricey domestic ones: http://www.runultra.co.uk/ and for a range of races, mostly UK based: http://www.ultramarathonrunning.com/races/uk.html

*disclaimer: these have not been completed by the author…yet

Post Views: 2,695
Want to join the LUCA News team? Click here to find out more.
About Seth Kennard 8 Articles
Runner, cyclist, climber, vet student and winner of second best pizza in year 8 cookery competition. I run any distance from 1500m (not very well) to 160km (with only slightly more success). Only truly happy in the mountains, and only then if I'm at the very top.

Congrats to everyone who raced at the first LUCA Cross Country race of the season, with a record turnout of 252 athletes! Placings can now be found on the results page   Post Views: 6,228

Two hundred runners turned up on Wednesday afternoon to tackle the gauntlet of the Wimbledon Common XC course, many of whom were also competing in the UL and  UH champs that takes part alongside this LCL race. Following a hasty post-race retreat before the rain arrived a well attended prize giving ceremony was held in the Rose and Crown – much to the delight of all who attended. For those of you who couldn’t make it, here are the top results from the afternoon competitions:   UL Champs, Mens Individual […]

Who are the speediest cross-country runners this year in the London student population? This question has been put to rest after the final LUCA London Cross-country League race for the season. Full results are posted here. The race, held at Bushy Park, took place on the 1st March 2017 and enjoyed a good turn-out of athletes from across the LUCA member clubs. It was agreed beforehand that the men and women’s races would be the same distance, which was set to 5km as a speed challenge for the cross-country runners. Students […]