At the elite level, there is a nature versus nurture debate in long distance running. Specifically, the question many people ask is, “why are East African runners so good?”

Although many scientists have tried to answer this question, the running community is still unsure on the whole. Geneticists have shown that there are ‘athlete genes’, which predispose some people to be better runners than others, for instance determining how much athletes benefit from training. All thing considered though, we are all genetically very similar. If most people have the ability to become a good runner if they so desire, why are some runners much more successful then others?

If it doesn’t come down to innate physical qualities, then perhaps it’s mentality that distinguishes the elite. Most successful runners believe in the “growth” mindset. This is the conviction that one’s basic abilities can be developed through dedication and hard work. Elite runners understand that through training they will improve and that their inborn talents don’t determine how successful they will be. This motivates them to run day in, day out for years and years.

However, one can easily fall into the trap in believing that simply running for hours will result in significant improvement. Some people run for years without getting much better; they put the miles in, but their downfall is that their training is unfocused. If you always run the same distance at the same easy pace, at first you will definitely get fitter, but eventually you will plateau. Perhaps you’re not interested in getting faster and want to run for enjoyment, in which case running consistently is great. But if you seek to improve, purposeful training is required. To say that it is practice which propels an athlete to the top of their field only tells half the story, it is the thousands of hours of purposeful practice they put in which sets them apart. This means practising in a way that you are challenging yourself, pushing past the comfort zone until you reach your ‘stretch zone’, to enhance performance on a competitive stage. This translates to running tough sessions a couple of times a week; powering around a track, sprinting up hills, or doing speedy tempo workouts. It could even be integrating one long run into your schedule to increase mileage, or trying weight training to develop your strength. Whatever it is, your training should physically stretch you. 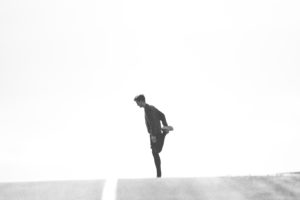 It’s also important to recognise that it takes years of training to become an elite runner. Whilst it’s possible to get to a good standard in a relatively short period of time with some guidance, you can’t shortcut the process of progressing from good to great. Attempting to run a marathon in under 2.5 hours after taking up the sport a few months earlier would be like expecting to ace an exam after only studying the night before. Simply put, it does not work. That’s not to say you shouldn’t aim high, but realistic goals must be set.

Overall, the most important characteristic of a successful runner is grit. That is, the commitment to finish what you started, to come back from failure and undertake purposeful practice over a prolonged period of time. It is easy to take up a sport or hobby and get absorbed in it for a short while; I’m sure everybody has made promises to themselves to learn a language, start playing an instrument or begin going to the gym on a regular basis. But then life gets in the way and our motivation to continue these pursuits declines until we forget about them. When I reflect on why other runners at my university are much quicker than me, it is often because they have been running for so much longer. They were training consistently for several years before I even started to run and the only way I can hope to rival them is to be gritty myself and to run even on days when it’s unpleasant.

To become a great runner is to become a disciplined individual. It may sound disparaging to say that it takes such commitment, but I hold a more optimistic view. Running on the whole is enjoyable, and when it is tough it’s even more gratifying. The journey of progressing from a novice to a top athlete is sure to be filled with tribulations, but these are dwarfed by the immense pleasure the sport offers you. More often than not, running is a case of mind over matter and the internal belief that you have the ability to become a successful runner is paramount. As the nine time Olympic gold medalist Paavo Nurmi once said, “Muscle – pieces of rubber. All that I am, I am because of my mind”.

If you’re interested in the nature of athleticism and breaking through biological limits I suggest reading “The Sports Gene” by David Epstein who delves in further on the subject of nature versus nurture. “Bounce” by Matthew Syed is another great read which reveals the mindset of successful athletes and what makes them tick.

The May bank holiday weekend brought much excitement for student athletics in the form of the BUCS outdoor athletics championships. There were spectacular performances from students around the UK, including new records in the Pole Vault (well done to Adam Hague with 5.35m), Hammer (well done to Taylor Campbell of Loughborough with 73.40m), as well as both the seated discus and shot put for Vanessa Wallace (F34) and Stacie Gaston (F57) in their respective categories. Being LUCA though, we want to give a great big shout-out to the students of […]

Blue skies and smiles for first ever London Students’ Run

Last Sunday, 121 students came down to run 5 or 10 kilometers around the Queen Elizabeth Olympic Park. The sun was out for the day, which made the race an ideal way to spend a Sunday morning. This was the first ever edition of the London Students’ Run and what a success it was. England Athletics supported the event which was sponsored by Cafe Football. Check our Instagram feed for all the photos from today's @LUCA_athletics students run !! pic.twitter.com/ad2WlyS7hP — The Run! Project (@RUNLondonEA) December 4, 2016 Even though […]

Is this the end of athletics?

With recent news of Usain Bolt, Mo Farah and Jess Ennis-Hill retiring, should be we be concerned for the future of athletics? London 2012 was meant to be the UK’s crowning glory; to inspire people to get into sports and combat the obesity epidemic. At the start it seemed like it was working; the Great Britain team outperformed expectations, the nation fell in love with stars such as Ennis-Hill, and sports participation rates were higher than ever in 2012. But for all that talk about ‘inspiring a generation’, the statistics suggest that sports […]