As the New Year is well and truly underway, it can only mean one thing: an overdue LUCA piece. After a quiet few weeks after indoors we’re straight back into the thick of it, with events coming thick and fast.

But first, let’s have a look back at the tail end of last year, mainly because I didn’t write anything at the time, but also to refresh our memories of the LUCA XC League situation.

The start of autumn term is hectic for XC racers; 3 races in 5 weeks, plus various league races for club runners, culminating in the 3rd LUCA XC at Wimbledon Common. Not one for the hill-averse, this course is a classic and delivered again this year.

St Mary’s generally bring quality runners along and this was no different as the men’s race was won by GB international Ellis Cross, with 3 other SMU runners – Thomas Butler, Sam Johnson and Will Stockley – joining him to complete the top 4. You would assume that would put the team competition to bed, but Imperial packed 5 in the next 7 as SMU closed in 12th to leave the margin of victory tighter than expected – 983 to 965. Mention must also go to Reading’s James Lyne who continued his penchant for leading out races and hanging on as he moved 2nd in the series with his 6th place here. 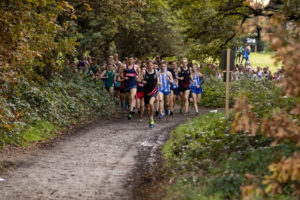 The theme of St Mary’s winners continued in the women’s race as Izzy Fry took the win by almost 30 seconds with a dominant run. It had to be a good run to beat Imperial’s Georgia Curry, who was 2nd to follow her 3rd at Parli Hill and win at Mitcham. Again, Imperial’s strong packing showed with 2nd, 3rd, 5th and 10th in the race, which sneaked them the match win by just 6 points from SMU. 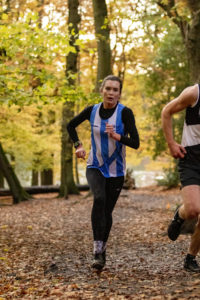 Wimbledon also hosts the UL and UH Champs within this race. In UL, UCL’s depth showed with a clean sweep of team wins; in the women’s race they won emphatically – Madelyn Huston, Allegra Wisking and Nicole Edmunds 1st, 2nd and 3rd UL. In the men’s champs their first man was only 5th UL but they went 5th, 6th, 7th and 8th to give a clear win from Barts in 2nd, who were also 2nd in the women’s race. Reuben Hoyte of RHUL took the men’s individual win ahead of Jack Dickenson (SGH) and Will Marshall (KCL).

Perhaps the most prized competition for some clubs is the medics’ Bannister Cup. ICSM had stormed to victory last year and had the first medic in both races (Niki Faulkner and Georgia Curry) but were undone by a lack of depth, which Barts, led by Liam Vandamme and Nayana Jain with respective 3rd places, capitalised on to win back a title they have dominated in recent years. RUMS picked up 2nd with ICSM back in 3rd.

At last year’s indoors, Brunel pulled off a stormer as they won the LUCA Championships with only 10 athletes. They would go again aiming to replicate the feat, this time with a 16 strong side, whilst UCL aimed to reclaim the gong they won in 2017. After a hard fought contest it would be UCL who emerged champions, sneaking it with 29 points to Brunel’s 26 in a valiant 2nd place. Central to their success were individual wins from Nicole Edmunds (800m), a clean sweep in the women’s 1500m from Madelyn Huston, Edmunds again and Rhian Male, whilst Huston also won the 3k. Brunel too had their winners in the form of Jordan Aki-Sawyerr (long jump & triple jump) and Kyra White (400m) but it was UCL’s all round coverage of events which brought them the title. 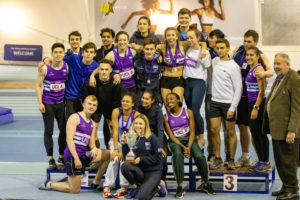 Daniel Cork (RVC) is no stranger to a LUCA Championship Record as he seemingly breaks his own record every year; this would be no exception. Throwing a staggering 16.13, he added almost a metre onto his own record from last year for a PB by over 20cm. Another record came from Royal Holloway’s Reuben Hoyte who won the men’s 3k in 8:44, taking 13 seconds off Max Nicholls’ previous mark. In fact the race would see 4 men dip under the former record in a very fast race, in which England international Alex Bampton was 3rd. 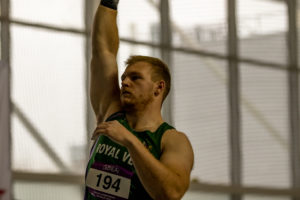 Unsurprisingly, UCL added the University of London title to their LUCA win, with King’s a close second, and St George’s in third. Meanwhile, the United Hospitals Championships promised a tight encounter, with RVC looking to defend their title and St George’s trying equally hard to win it back. The quality of UH competition seems to have rocketed in recent years and it was another close contest again. RVC and St George’s had a right ding dong and whilst both had several athletes take UH wins, it was George’s who prevailed by a margin of 10 points, RVC putting in a valiant shift to come 2nd with 54. When St George’s won in 2017 they did so with 44 points; that would have only got them 3rd here. 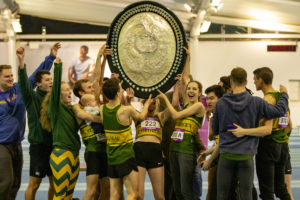 With another record year of entries the indoor champs seems in rude health and now we’re in the new year the track season is almost tangible – not long to wait now for some outdoor action which doesn’t take place in a muddy field!

Looking ahead to this Wednesday, both league tables couldn’t be tighter. Both come down to those 2 teams again, St Mary’s & Imperial, with both evenly matched after 3 races. St Mary’s men have a lead of 27 points, 2931 to 2904, whereas it’s Imperial’s women who have the slender advantage of 45 points, 1754 to 1709. UCL’s women though are close behind on 1687 so one bad race from any team could see changes in the table. Ally Pally is historically perhaps one of the lower turnouts so a side which brings strength in depth could make huge gains ahead of the finale at Scrubs.

Indisputably the highlight of the winter, BUCS will again see thousands of students descend on some poor university for the weekend, this time to Edinburgh for a mud-spattered contest against all the students in the country, and that’s just the post race night out. London’s main challenges will come from last year’s men’s team winners St Mary’s, who will have Emile Cairess, Anna Moller and Abdulquani Sharif defending their individual titles. UCL though could be an outside contender in the men’s race, with Roger Poolman, Alex Bampton and Gus Cockle forming a strong team.