‘The world’s most exciting track meet‘ is back with a bang this Saturday 6th of July, as thousands are once again expected to descend on Parliament Hill for the 7th edition of the Night of the 10,000 PBs. Having attracted 8,000 spectators, as well as over 50,000 watching online, you could say that the atmosphere might be more Glastonbury than the usual serenity of Hampstead Heath come the last few races. 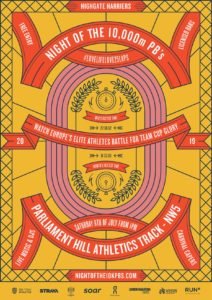 The remarkable thing is, this isn’t organised by some big events company or a national governing body, but an amateur athletics club much like many across the UK. In that respect it is a bit like Glastonbury I suppose; an event started by people out of passion which has evolved into a huge celebration, be it of music or athletics. At the first event in 2013, they had a crowd of “maybe 50-75 people“. Now, it seems no innovation is beyond them; the day boasts beer tents, fire jugglers, a bridge over the track, and for this year new ‘Wavelight’ technology which shows where various paces would be on the track (no I’m not sure either). A guest panel which in the past has hosted the likes of Ronnie O’Sullivan and Seb Coe will this year feature Liz McGolgan, Bram Som and Andy Vernon. And to cap it all off, it’s free! 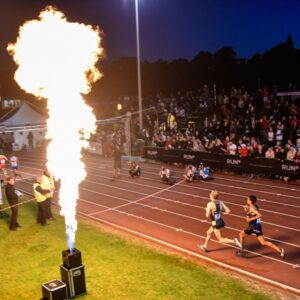 Such has been it’s success that from 2014 it included the British Championships, and served as the trials race for the 2016 Olympics, 2017’s World Championships and the 2018 European Championships. It now includes the European 10,000m Cup, which sees athletes from various nations competing over the distance to add a team dimension to the individual aspect. It feels a long way from the ‘traditional’ track meets. Race director Ben Pochee, who must be the event’s Michael Eavis, said “When we race, it should be like a big celebration–almost like a wedding.” It seems that given the event’s growth and raucous success, perhaps this way of promoting the sport and engaging new audiences is the future of track and field?

The proof of how far the event has raised 10,000m standards is in the line ups for this year; in the men’s F race, the majority of runners boast a sub-32 PB, whilst a large proportion of the women’s C race boast sub-35 times. The A races will be frankly ridiculous times – last year’s winners ran 27:32 and 31:33 respectively. Given the high quality it is great to see some LUCA representation in amongst the races, in the form of:

There will surely be more LUCA support on the day, given UCL’s burgeoning partnership with Highgate. So grab a non-runner and get down to Parli Hill on Saturday – if this doesn’t convert them, nothing will.