There was a nervous but hopeful atmosphere in the red starting area an hour before the London Marathon was to commence. It was akin to a music festival with big screens, portaloos and a sea of excited individuals in shorts. We were funnelled into the start zone and it was only when we were crammed into the pens that the scale of the race dawned on me. We stood there for an endless amount of minutes, making small talk and prepping ourselves for the quest ahead of us. Eventually the clock ticked past the hour and we counted down from ten until the horn sounded and everyone hustled eagerly through the start.

One of the nice things about running a marathon is that it starts off easy. Your legs feel free and you cannot imagine ever getting tired. The first couple of miles raced by and I felt great bobbing along, working my way through the field. I was confident. I had my target pace burned into the back of my brain and was enjoying everything about the race, high-fiving the kids supporting on the roadside. I was in the middle of one of the greatest races on Earth and trying to take it all in. There really was a lot to see; brass bands playing, the view across the Thames. It was understandable why every marathon runner is so keen to race in London. Being in that huge mass of people, all striving for the same goal, felt truly awesome.

After passing the Cutty Sark and running across Tower Bridge, I crossed the halfway mark in a flurry of music and celebration. The crowd was starting to pick up giving all the runners a noticeable spring in their step. The miles continued to tick by and I was hopeful of achieving my target time. People say that a marathon only really starts in the second half, and I was empathising with them as the miles continued to tick by and I was having to work harder to maintain my pace. I had already taken on three gels and I could feel the energy draining from my legs. I went through miles 17 and 18 and my speed had dropped by a few seconds per mile, but I was still sure I could make my goal. Whenever I was suffering in training I knew it was all worth it to prepare me for the last few miles of this marathon. 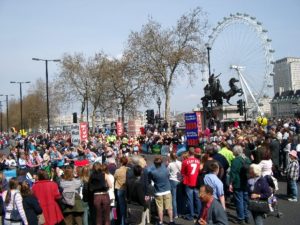 At this stage the race had thinned out and I realised I was running next to a lobster. I thought it could not be a good sign if someone dressed as a shellfish was running at the same pace as me at about 18 miles in, although I did see the obvious amusing side of this. Time now seemed to be slowing down. It was starting to get hot and I felt in dire need of water at the next station and impatiently consumed another gel. I was starting to hurt, but only had 8 miles to go and was confident I could achieve my goal if I kicked on. After a few more minutes though, it dawned on me that 8 miles was still very far considering my legs were feeling more and more painful as I battled through.

I looked at my watch more and more, getting a sudden boost of energy for a minute but then feeling drained again, working harder and harder to keep on track for my goal. In the back of my mind though, I knew it was slipping away from me. I seemingly unknowingly drifted in a dream-like state. My legs starting to feel like they were made out of lead but I managed to just about block this out and push on. Mile 20 passed and I remember vividly thinking that it wasn’t real and I couldn’t be in the middle of the London Marathon. Surely I was just imagining it, I thought to myself. I felt so depleted. Of course, I had felt tired before whilst running but this was it was something else, akin to when I had once gotten altitude sickness. I looked down at my watch and saw 20.6 miles and then kept on going for what seemed another couple of minutes. My watch showed 20.7 miles. And the next time 20.8 miles. It seemed like I was barely progressing at all.

Passing through mile 21, I suddenly woke up from my trance like state. The field of runners was even more sparse now and for the first time it felt like I was alone in the race. I had just 5 miles to go but I was spent. It was starting to dawn on me that I wouldn’t make it, but I kept on telling myself it was just over half an hour to go. Half an hour of suffering couldn’t be that bad, could it? My whole body was feeling rigid though and I thought I was about to be physically sick.

The finish line seemed so close now after the previous two hours. I had to push through, surely I could find the energy from somewhere. But all of a sudden without even knowing it myself, my legs stopped turning over. I had come to a halt somewhere just shy of the mile 22 marker. I was motionless but couldn’t quite believe it yet. I had never pulled out of a race before, surely this wasn’t happening. I limped forwards a couple of steps but could barely seem to walk. A flux of people rushed by me as I stood helplessly in the middle of the road. I was in a daze and could barely keep my eyes open anymore. My legs were shaking and I felt like I was about to faint. I knew it was over. I couldn’t carry on.

Bushy Park – the final showdown of the LUCA LCL races

Name: LUCA London Colleges League race Bushy Park What is it: Part of a series of cross-country races run by LUCA for all students from London universities – see more details at http://www.london-athletics.com/lcl/   When is it: 1st March 2017; start 3:15 pm Where is it: Bushy Park (see travel details: http://www.london-athletics.com/maps/bushy/) Course details: Full course details can be found at the same link as the travel details Registration: Carried out by clubs rather than individuals, so just get in touch with your universities’ running team to find out more Results: You […]

Who are the speediest cross-country runners this year in the London student population? This question has been put to rest after the final LUCA London Cross-country League race for the season. Full results are posted here. The race, held at Bushy Park, took place on the 1st March 2017 and enjoyed a good turn-out of athletes from across the LUCA member clubs. It was agreed beforehand that the men and women’s races would be the same distance, which was set to 5km as a speed challenge for the cross-country runners. Students […]

Written by the Hyde Park Relay organisers 2pm on Saturday 11th February 2017 will see the running of the 69th annual Hyde Park Relay race – the UK’s largest student relay race – organised by Imperial College London’s Cross Country and Athletics Club.   What are the Hyde Park Relays? The relays involve racing on the paths of the famous Hyde Park. The race will consist of 6x5km chip-timed legs for men’s/mixed teams, with women’s teams running 4x5km laps. Who can compete? A wide range of abilities are welcome to race, with […]