This week is Eating Disorder Awareness Week: an entire week dedicated to raising funds and awareness for one of the most common, but misunderstood mental health conditions. Today is also University Mental Health Day. Below, I share my story, and how sport helped me to overcome it. I’ve tried to keep it positive, but please don’t read it if you think it may be triggering. At the bottom is a list of helplines and support resources if you, or anyone you know, is struggling.

“You are lucky to be here”.

I still remember the words the doctor said to me. I was sixteen and in hospital, suffering from anorexia. I didn’t believe him, of course. It’s only now, much later, that I can see he was right.

I was always a hyperactive and sporty child. You name the activity, I did it. As I started high school, I began to ‘get serious’ about dance, and this became my main hobby. Practices started to get longer, and soon I was training sometimes upwards of three hours per day. On days we didn’t have practice, I went running. Most girls doing the same as me handled it absolutely fine: unfortunately, I didn’t. I developed an eating disorder.

To start with, people didn’t really notice: they just thought I was dancing more, eating less, and had lost a bit of ‘puppy fat’, as is normal for any eleven-year-old. However, it soon became apparent it had gone a lot further than that. Throughout my teens I bounced around between ‘healthy’ and ‘underweight’, between ‘sick’ and ‘not-so-sick’.

I spent time in school, and there were times when I was too unwell to go to school. I tried to keep up sport as much as possible, but lied to everyone about the amount of food I’d eaten or the exercise I’d done. Eventually, things spiralled too far, and I found myself hospitalised aged sixteen, and told I may not survive. I felt like I’d lost everything: school, sport, friends.

I began to recover, slowly. I had two main motivations: to return to school and sit my exams, which I had had to defer for a year, and to return to the sports that I loved. The first happened before the second: it was a long time before I was allowed to exercise again, and to start with, it was minimal.

I was frustrated with having to gain so much weight, and struggled a lot with my new, bigger, softer body. But I did begin to find the joy in exercise again. After so many years of it being a painful chore, I could once again dance for the freedom of expression, or run just to feel the wind on my face. I’ll never forget my first 8km run back along my local canal. It was slow, but it felt like flying.

The truth was hard to swallow.Fast forward to age eighteen. I had passed my exams with straight A’s, and gained a place to study medicine at UCL, far away from my small hometown near Edinburgh. I was excited to start afresh, and tried as many sports and societies as I could in ‘Fresher’s Week’. I had always thought I would dance, but found the running club to be the most welcoming and friendly, so decided to stick with it. Over the weeks, I could feel myself training more and getting faster.

The more I ran, the better I felt. Unfortunately, I neglected to keep an eye on my health. Old eating disorder habits crept in without me realising it, and I lost more weight than I should have. I kept training hard, but frequently got colds or minor niggles, which I made myself train through. I thought if I wanted to be a better runner, I just needed to run more and more. People tried to warn me that I was over-training, but I didn’t want to listen. After all, I didn’t have an eating disorder any more, right?

I was ‘breaking’ so easily.

Sadly, I was wrong. Every athletic goal I had came crashing down in November 2016, when I was diagnosed with a triple stress fracture in my foot. I was on crutches for four weeks, and limited in the activity I could do – it made me absolutely miserable. I cross-trained as hard as I could, determined not to lose an ounce of fitness or to gain a pound of ‘fat’. I returned to running in the Spring, only to sustain another fracture in my tibia in late April. Same story, more anxiety, more cross-training. I returned to running in late July, only twice a week – I was trying to be cautious. Yet in early September, my fifth stress fracture happened, this time in my spine. My doctor decided then to refer me for further tests, to find out why I was ‘breaking’ so easily. 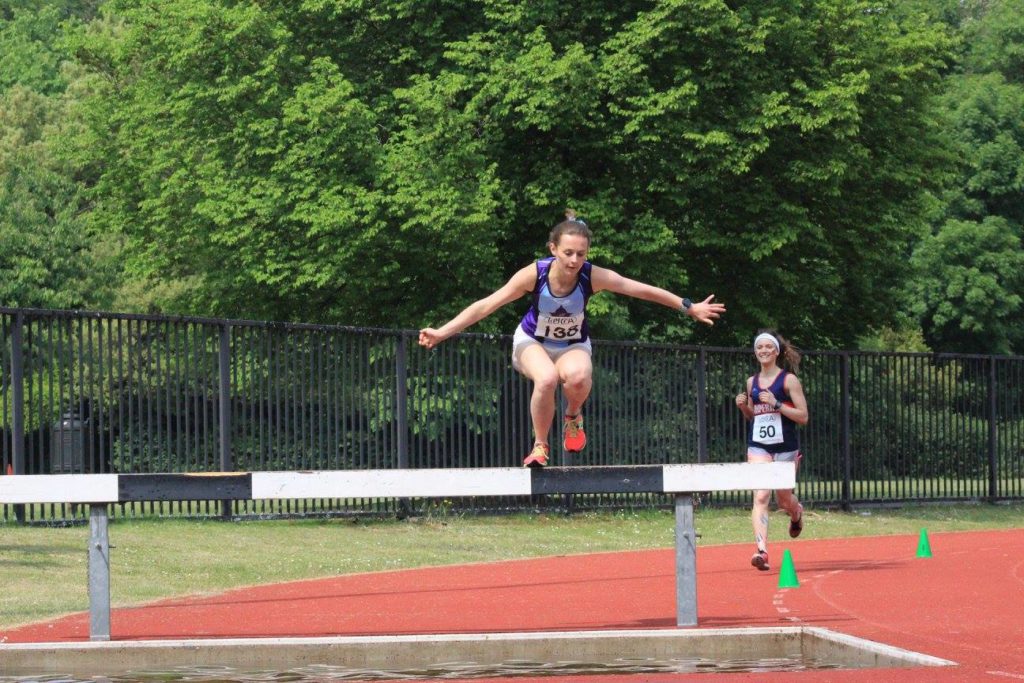 The truth was hard to swallow. The combination of my eating disordered past, plus over-training in my first and second years of university, had disrupted my body’s natural bone-building and left me vulnerable to stress fractures. I felt like it was so unfair: here I was, years on and meant to be ‘recovered’ – why did I still have a problem? Why was my past threatening everything that I’d worked hard for? I had to come to terms with the fact that exercise was off the cards for the foreseeable future. Running, possibly forever. I was told my only chance of fixing things was to do what I feared most: stop exercising, eat more, and gain some weight. I lost a lot of sleep thinking about it all, berating myself with ‘what-ifs’ and ‘should-haves’. But eventually, I made a decision, that my love of running was greater than my fear of food and weight. I had to swallow my pride, and accept that maybe I wasn’t as ‘recovered’ as I thought. Gaining the weight was hard. Seeing my friends running, when that’s all I wanted to do, was even harder. But I knew there was no alternative, if I wanted to do what I loved.

The sooner an eating problem is addressed, the higher the rates of recovery.

In late January, the doctors re-tested my bone health, and it had improved a lot. People around me commented that I looked ‘healthier’ again. I’ve been told that, provided I keep eating and maintain my weight, I can run again from March. Having read more about it, I’ve found out just how common eating disorders are in runners, especially women. Not just full-blown anorexia, but under-fuelling, low weight, and poor body image. It’s an entire spectrum, and the horrors of my teenage anorexia are the pointy tip of a very big iceberg, that goes largely unnoticed. People are starting to talk about it, but there’s so much more to be done.

If there’s anything you take from my story, I hope it’s that disordered eating can happen to anyone, and can threaten everything you love about sport. If you’re currently struggling, know that you are not alone, but please, please seek help, before it hurts you in the ways it hurt me. The sooner an eating problem is addressed, the higher the rates of recovery, and the fewer long-term complications. Runners, look out for yourselves, and look out for your friends, too. If something doesn’t seem right, speak up. Sometimes people, like me, can’t see what’s really going on until it’s too late. So speak up, speak out, but above all, know this: there is hope.