Athletes are preparing for the final LUCA at Battersea Park tomorrow.

In a record breaking season, another record fell on Tuesday as entry numbers reached 217 – the highest turnout for a LUCA outdoor competition.

One of those athletes is Kerstin Pohlmann (pictured). Pohlmann leads the charge for the MVP award (the athlete with the most points overall). She’s collected points across jumps, throws and hurdles. King’s will be hoping that Kerstin can help the club hurdle over their final challenge – to clinch the Outdoor Series.

Harry Browning, President of King’s Athletics said “King’s is hoping to finish the outdoor series with a bang. With the LUCA trophy almost in the bag, King’s athletes will be going out all guns blazing to win the UL Championship and end the day victorious on both accounts!”

There’s a lot to play for, and the added University of London Championships gives an extra dimension to the fixture. If UL champs had been held at the first or second meet, King’s would have been champions. Only one problem – they weren’t – and UCL will know that their final chance of more silverware is rests on them winning the day at Battersea. That may seem like a tall order, but this is a team that beat KCL in varsity two years running and are the reigning Indoor champions. It’s surely going to be close.

Could UCL stage a dramatic comeback?

It would be unprecedented, but then again, the league is young and in athletics anything is possible. UCL have collected the same amount of points as King’s in middle distance events (58) and have scored higher in distance (52 to 31) and jumps (87 to 83.5).

But their problem is the sprints and hurdles, where King’s have collected 139 points to UCL’s 71. A huge bulk of these points have come from the 400m, where King’s athletes occupy first and second in both the men’s (Harry Browning and Daniel Woodburn) and women’s (Fran Ashworth and Chloe Hocking) standings. UCL will have to close the gap significantly in the sprints and hurdles to have any chance of mounting an historic defense of their title. UCL President Henry Murdoch is up for the fight: “UCL a ready to show their true colours and will fight for every last point”.

Imperial suffered from the re-scheduling of the first meet, but came second at Lee Valley, just 12 points behind King’s. They trail UCL by 43.5 points, but similar gaps have been overturned in the past. It will take a tremendous effort, but President Alex Mundell, who has accumulated 43 of Imperial’s 300 points by herself, is optimistic: “Imperial are leading a revolution. Regicide is a must.” Now that’s fighting talk. 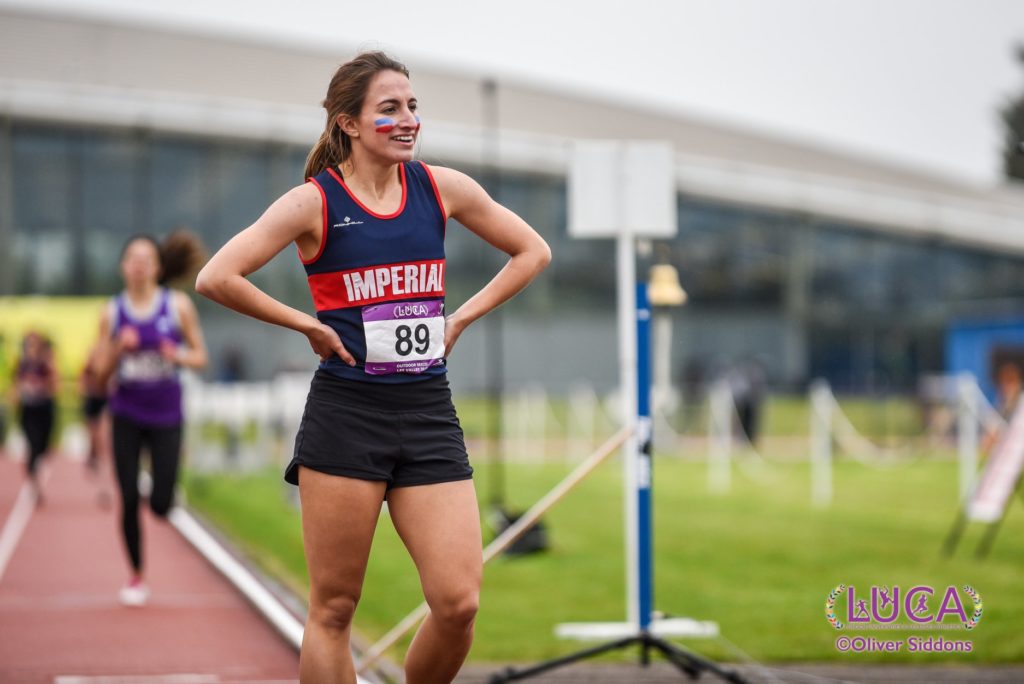 Men’s 4X400: It couldn’t be much tighter. UCL and LSE are tied on 11 points and KCL are just one point behind in third. There’s only 1 seconds’ difference between KCL’s and UCL’s best time so far, so expect a cracking race.

Men’s 200m: At parliament hill, Keano-Elliott Paris-Samuel set a LUCA Championship record of 22.30. At Lee Valley he set another record with 22.19. At this rate of progress, he’s set to break the 22 second barrier tomorrow, something he’s more than capable of.

Women’s 5000: Another close one with a packed field of 19 athletes. Ula Krajinska missed the last meet but is still in the running for a podium place. Angharad Flower has been in impressive form and will be the favorite for this one.