A little under two weeks ago, we reported that two British sprinters, James Ellington, 31, and Nigel Levine, 27, had suffered career-threatening injuries after both colliding with a car whilst riding a motorbike in Tenerife. They were in the Spanish island in order to attend a warm weather training camp.

At the time, British Athletics chose not to give a full statement on the pair’s injuries beyond both being “conscious and stable” but subsequently revealed on Wednesday 25th that both men had suffered a “suspected broken pelvis”, with James Ellington additionally struck by a leg broken in two places and a facial fracture. Additionally, both men were “safely returned to the UK via air ambulance”.

That same day, Ellington had surgery at a London hospital and later tweeted “Out of surgery, all went well”. Whilst he feels like has “done 200 rounds with Tyson and 50 marathons”, he is nevertheless hoping that both he and Levine will be able to “bounce back” after the accident.

He also posted a photo on Instagram thanking everyone for their “messages and support” and saying he was “truly blessed” to be alive. 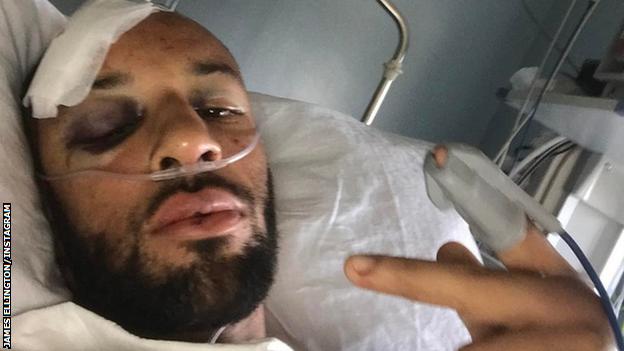 Levine hasn’t posted on social media since the incident but was reportedly less seriously injured than Ellington.

British Athletics continued their statement by saying: “Both athletes have been admitted to hospitals in London where they are receiving specialist medical treatment for their injuries, under the supervision of the British Athletics’ medical team.

“Both James and Nigel have been overwhelmed by the support they have received since the accident last week.”

Ellington is a 100m and 200m specialist and a two-time Olympian who was part of the gold medal-winning 4x100m relay teams at the 2014 and 2016 European Championships.

Obviously when it comes to sprinting, a broken pelvis has a great potential to prove career ending so we wish Ellington and Levine all the best and hope for their speedy recovery and rehabilitation.

Post Views: 1,374
Want to join the LUCA News team? Click here to find out more.
About Jay Reynolds 4 Articles
Jay is a 20 year old American Studies student at the University of Essex.
Website

Injury Anxiety: the path to recovery

All athletes experience injuries from time to time. But the thought of being injured, and taking time out from our sport, often evokes a hell of a lot of frustration, self-doubt, and anxiety. So, besides the obvious physical pain of injury, we are often left feeling heartbroken and a little bit empty too, torn away from our love affair by shin splints. There are plenty of incredibly useful articles out there about how to recover physically from sports injuries; from stretching to strengthening techniques, or ice and elevated resting. Many of […]