For over 100 years, many athletes have strived for the Olympian glory of both summer and winter games. For the first time since the establishment of the modern Olympics, a team composed of athletes from 4 different countries will unite their strength and compete for the refugees under the Olympic flag, rather than representing their home countries. The 10 athletes were selected by the International Olympic Committee (IOC), out of 43 potential candidates identified last October. The selection comprised of two swimmers from Syria, five South Sudanese track and field athletes, two judokas from the Democratic Republic of Congo and one athlete from Ethiopia running the marathon. 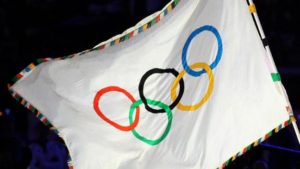 It is not the first time that athletes are competing under the Olympic flag. For example, in 1992, over 50 contestants competed under the Olympic flag at the Olympic games in Barcelona, due to a war in Yugoslavia. However, the creation of the refugee team is a highly symbolic, as well as political, decision. Indeed, since the Second World War, the number of refugees and internally displaced individuals is now at its highest. Although the team are coming from four different countries, the ten athletes are united together under the Olympic flag to represent and honour the courage of all refugees and populations suffering from the hardship of warfare. They are telling the world and their refugee counterparts, inspirational stories about bravery, hopes, dreams and commitment. Here is a glimpse of their talents and commitments that pushed them towards the podium of excellence. 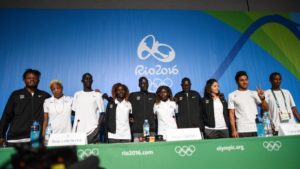 Meet the running team: starting with five accomplished middle distance runners, sharing similar stories of a child who was separated from their parents and fled South Sudan for Kenyan refugee camps, where their passion for athletics began. The hardships of the camps were spokes in their wheels. They trained with nothing: there were no facilities, no gym, not even shoes. Even the weather conditions and the heat were a challenge. 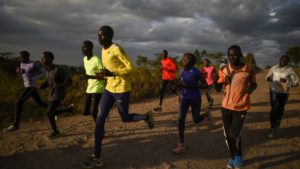 James Nyang Chiengjie will compete in the 400m, Yiech Pur Biel and Rose Nthike Lokonyen will run the 800m race, and Paulo Lokoro and Anjelina Nadai Lohalith will compete in the 1500m event. They will be joined next Sunday by the other runner and elder of the refugee team, Yonas Kinde, a 36 year old marathoner who travelled to Luxembourg after leaving his motherland, Ethiopia. His story is about how passion, commitment, and hard work can pay off. Living in Europe for 5 years, he trained and ran every single day, balancing his work as taxi driver with his passion for marathons.

Two young talented Syrians, composing the swimming squad, join these inspirational stories. Yusra Mardini and Rami Anis, aged only 18 and 25 respectively, have made their way to Rio after months floating in a tunnel of despair, constant danger and uncertainty. As with many other counterparts from the Middle East, they braved the perils of the deep water to leave their country. Yusra and her sister became famous before Rio for their act of heroism on their journey to Europe: swimming for countless hours, pushing a lifeboat, in order to save 20 passengers. Both Yusra and Rami underwent weeks of walking across Europe with other asylum seekers and refugees, to Belgium and Germany respectively, where they started training with their new coaches. Though they won their respective first heats, the two athletes did not make it to the final. 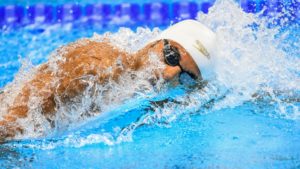 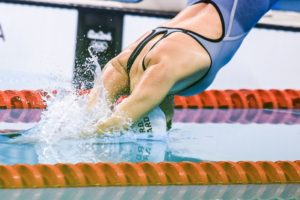 Finally, the judokas, Yolande Mabika and Popole Misenga, will compete in the women’s and men’s middleweight selections, respectively, under the Olympic flag. Separated from their families, they fled their home village in the Democratic Republic of Congo for the capital of the country, Kinshasa, where they discovered Judo. The sport was their salvation to the hardship of Kinshasa: it helped them to build resilience – gave them a “strong heart”, as well as helping them to “find inner peace and serenity”. Three years ago though, representing their nation at the world championship in Rio, they suffered from abuses and violence from their (now former) coach and ran away. They are now both training in the Brazilian capital after seeking asylum. 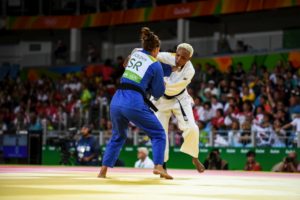 Yolande Mabika during her fight © UNHCR

Although none of the athletes have reached the podium (yet), they are already winners for their courage and the values they hold. They are sharing a story of hope and bravery. They have brought with them to Rio their noble motivations of peace and unity promotion, of inspiration for their refugee counterparts all around the world. Motivations and values that have been scorned for many years by various doping and corruption polemics. The refugee team is not just representing the refugees, but is also an ambassador of the Olympic values of sportsmanship and respect. The creation of the team is not just a tribute to refugees, but also a desperate act to bring credibility back to the Olympic Games.

Post Views: 2,229
Want to join the LUCA News team? Click here to find out more.
About Shala Nourmamode 4 Articles
Keen of Neuroscience and Sport, and highly interested about non-communicable diseases; Shala is has completed a MSc. in Global Health at UCL and graduated in Neuroscience at King's.