Last weekend, the annual pilgrimage to Sheffield for BUCS indoors returned as on Friday the 15th, the weekend marking the opening of the athletics season kicked off at 13:00 with the Men’s 60m heats on the track. With 109 entries, it was the most contested event of the Championships.

Friday saw the heats, semi-finals and Finals for the men’s and women’s 60m sprints and hurdle races, the 800m heats and for the field events, the weekend started with the Triple Jump and Shot Put pool stages.

For the Men’s Ambulant 60m sprint, Jordan Andrew who qualified with 7.52, won the final and brought Gold to East London with a time of 7.58. In the Men’s 60m sprint, Oliver Bromby from East London, after qualifying in 6.89, took silver in 6.80. Daniel Oderinde from Middlesex came in 6th place with 6.85, with Brandon Murray from St Mary’s coming right behind him in 7th place in 6.90. Wrapping up the day, at the men’s 60m hurdles final, Khai Riley-La Border from East London took gold in 7.81, with Edson Gomes from Middlesex coming in 5th in 8.13.

In the Pole Vault, Ellie McCartney from Brunel came in first position, clearing 4.00m in the finals, grabbing a PB at possibly one of the best occasions. Sophie Dawson, also from Brunel, cleared 3.70m and won Bronze for her team, allowing Brunel to dominate the podium. Isabel Deacon from St Mary’s cleared 3.50m earning herself 12th place in the final. 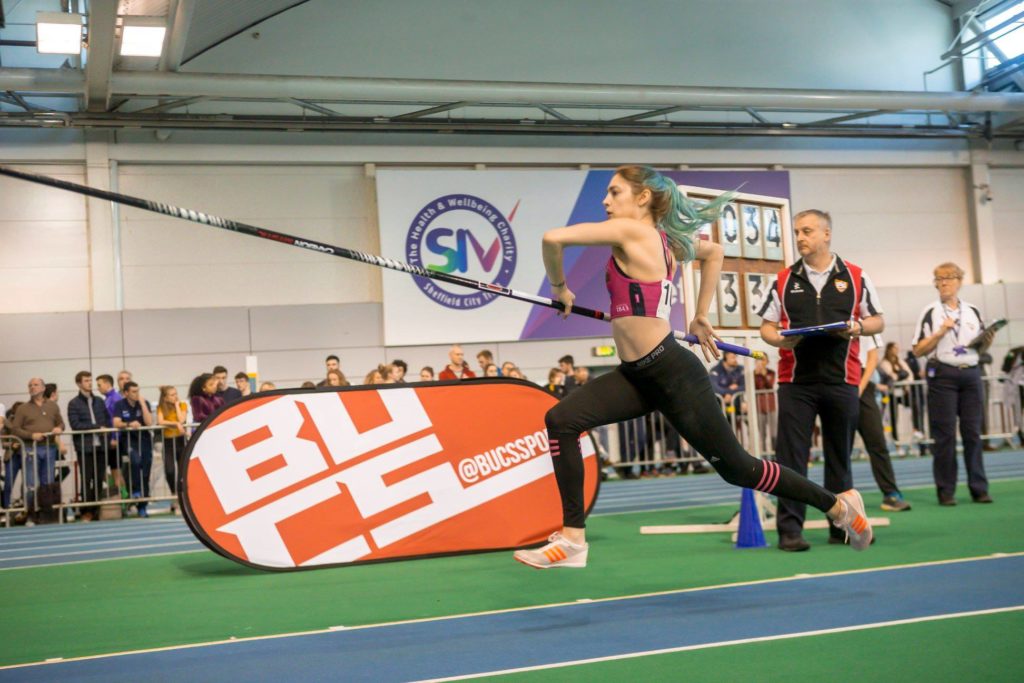 The mascot race, the classic nail-biter of the weekend, saw LSE compete in the final, with their mascot Felix the Beaver come in second place!

After another successful day for the LUCA athletes, it was time to celebrate quickly and have an early night in order to be in good shape for Sunday, when most of the Finals were still to go.

After the preliminary stages for the short distances, it was time for the 3000m finals.

For the women’s race, Dani Chattenton from Imperial, after leading the front pack for most of the race, took her shot with 4 laps to go before the finish line, and absolutely dominated the track as she distanced the Birmingham athletes who were following her, and won by a lead of over 4 seconds and finishing in 9:37:68, completing most of the last km cruising at the front! 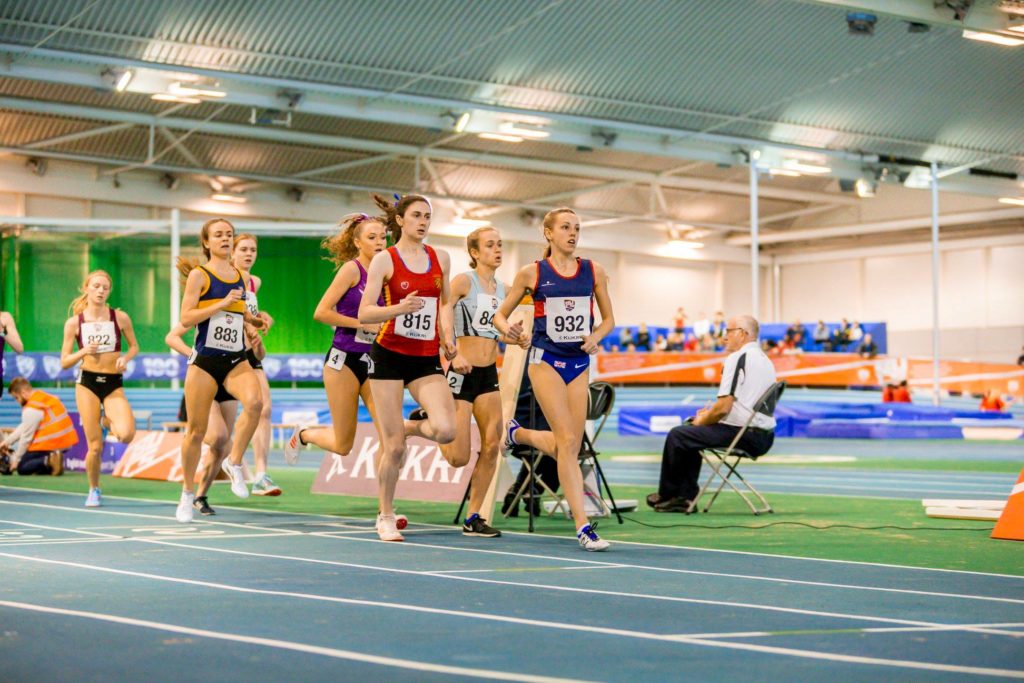 For the men’s race, dominated by Birmingham’s James Gormly in an outstanding 8:09.40, LUCA teams were represented strongly by Abdulquani Sharif from St Mary’s coming in 5th place in 8:20.11, Imperial’s Daniel Mulryan coming in 8th place in 8:31.12 and Daniel Jarvis, frequent runner in the LCLs, coming in 11th place in 8:37.43.

In the men’s 200m race, Luke Dorrell from Brunel, after qualifying with 21.38, took silver in the final with 21.13, only 2 hundredths of a second behind James Glacman from Bath, while Keano-Elliot Paris-Samue from St Mary’s came in 5th place in 21.91.

In the men’s 800m final, Thomas Randolth from St Mary’s, with a qualifying time of 1:52.39, came in second place bringing yet another medal to St Mary’s, finishing in 1:53.29 with Brunel’s James Downing at his heals, completing the podium in 1:53.51.

In the women’s 1500m race, just over an hour after winning the 3000m final, Dani Chatterton was in the front pack and won silver in 4:26.21, less than half a second behind Birmingham’s Emily Thompson, winning her second medal of the day.

The last track finals of the weekend were the 4×200 relays. After Saturday’s qualifiers, Brunel and East London were in the women’s race and performed outstandingly as they came second and third in 1:41.03 and 1:44.32 respectively.

For the men’s race, East London also fielded a strong team as they came in third as well, finishing in a rapid 1:28.05!

LUCA athletes had a great day on the track, with medals at many events, but they also put on a great show during the field events!

In the women’s shot put, Brunel kept on putting in stellar efforts as Amy Holder came in 8th place with 10.89m and Leanne Davies came in 11th position with 10.26m.

Overall, the weekend was a roaring success for LUCA teams and athletes, with outstanding performances displayed by everyone who competed, with special mentions to Brunel, East London, Imperial and Middlesex who had some rather exception athletes competing! 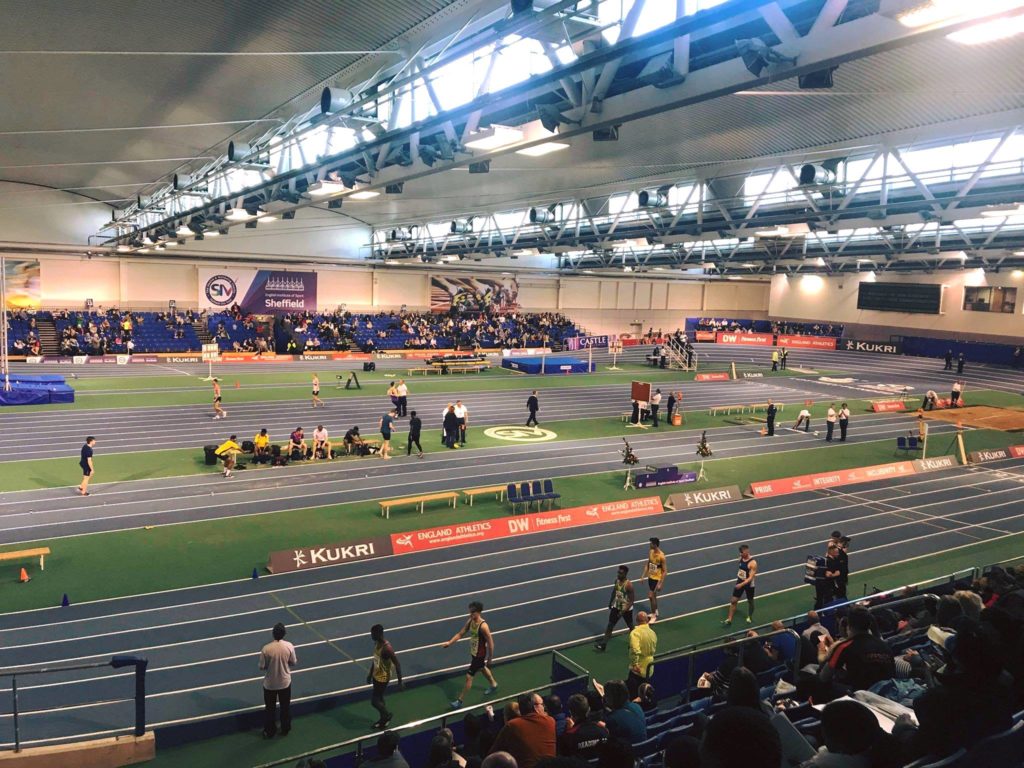