The Boston Marathon is the world’s oldest annual marathon which begun in 1897, the 2018 Boston marathon is already the 122nd edition. The course is 26.2 mile straight from Hopkinton to Boston; It is always held on Patriots’ Day, the third Monday of April. These make Boston marathon unique, like their unicorn logo.

Boston Marathon is special and the race day weather was unusual too. It was freezing cold, windy and rainy. Based on my 10k and half marathon result in recent two months, I set my goal as 2:55, after I checked the forecast, I realised that wasn’t a good chance. But if I didn’t try, there was no chance. I didn’t care about the rain and the temperature because I always run in wet and cold London, I just worried about the wind. 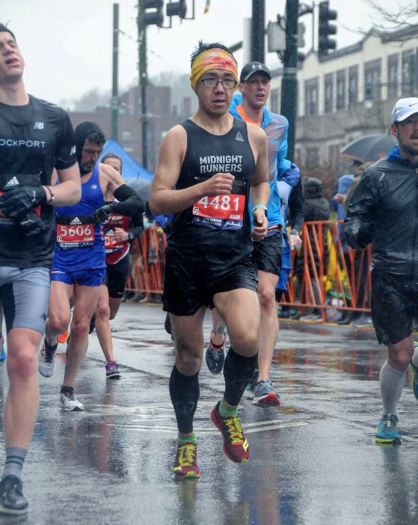 Unfortunately, the weather forecast was right. Only 2 degrees in the morning and rainy. The race always starts at 10:00 am, but the runners need to take the one-way bus to Hopkinton before 7:00 am. Thanks to the jet-lag, it was so easy to get up early; and thanks to my poncho and overshoes, I was freezing but didn’t get wet before the run.

The spectators and volunteers are the real heroes.

It was a little crowded at the beginning, but it didn’t slow me down, everyone around me were in the same level and aiming for the similar time. There were some head winds but it wasn’t too bad, because I can easily avoid the wind by run behind a runner. The first half was easy, many down hills and the rain was not too heavy. I paced well and passed half way point with 1:27:22, right on plan. The atmosphere was amazing, the spectators and volunteers are the real heroes, standing in the rain is worse than running in it.

The challenge started in the second half. The course became hilly, the wind became stronger and it was raining cats and dogs. My feeling of the weather was completely wrong, the wind was not so bad but I underestimated the rain. Low temperature and heavy rain cause hypothermia, many runners quitted. Even some elite runners were running with waterproof jacket but I was stupid that only running with vest and shorts. I failed to lose weight before the race, so I had enough fat to avoid hypothermia… No watch checking when running against wind and in hilly course, I just listened to my body. After smashed the famous heartbreak hill, I hoped to speed up, but my legs didn’t agree. 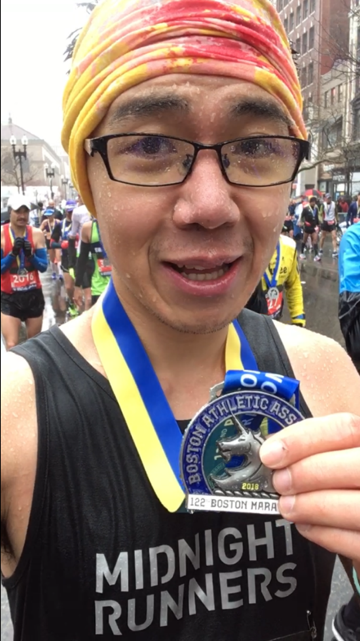 Finally I competed in 2:57:41, I didn’t hit my target and the result was just 40 seconds slower than my PB, but I was happy and proud of myself. In these terrible conditions, I didn’t give up, got a sub-3 time and did it in positive splits. But the post-race walk was thoroughly not enjoyable, I felt like I was freezing to death and a volunteer took me to a warm place with a wheelchair.

Not my first back-to-back marathon attempt.

Fortunately I didn’t get sick after the three-hour cold shower, and it was time to prepare for the London Marathon. This was not my first back-to-back marathon attempt, in last October, I did 3:05:50 in the Chicago marathon, I was a little disappointed, but only after one week, I smashed my PB in Budapest with 2:57:01.

So I hoped to repeat the Budapest miracle in London. I returned to London on Thursday morning and went to the Marathon Expo directly from the airport. Nothing is cooler than to visit the London Expo with a Boston jacket.

After visiting the Expo, I received an email from London Marathon, it said “The weather forecast for Race Day on Sunday is currently predicted to be the hottest on record”. Oh my god, why I have to run two marathons in one week and both in extreme weather condition…

I knew I had to slow down or I was going to collapse or pick up an injury.

Unfortunately, the weather forecast was right again, it was roasting and I recovered slower than I estimated. But I didn’t change my plan and started with 3-hour’s pace. I paced well in the first 3 miles, but only after 6 miles, I felt like I have already ran 20 miles. I knew I had to slow down or I was going to collapse or pick up an injury. So I discarded my paceband, slowed down to enjoy the cheering from the spectators and enjoy my favourite city.

After I crossed Tower Bridge, I met some elite runners like Kipchoge and Farah, they ran from opposite on 22nd mile. “Come on Mo!” I shouted loudly. I thought if I had ran fast, I would have missed them, a loss may turn out to be a gain. 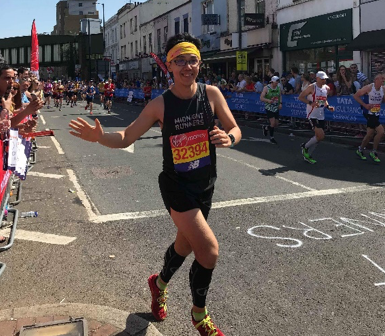 It was not enjoyable anymore after the real 20th mile. My legs announced a strike, and I had to walk. At mile 22, one of my friend overtook me and asked: “did you ran Boston on Monday? And why are you doing this?” Yes, why was I doing this…?

This is marathon running –  maybe the process is not very enjoyable, but I’m always happy and looking forward to the next one after finished.

In the last part of the race, I entered the rhythm of “walk 1km > jog 1km” and didn’t miss any chance to drink water, I even started to miss the rain in Boston; no hydration needed in Boston! Quite a few runners collapsed in the course, so it was sensible to slow down. I jogged the last mile of the race and my time was 3:48:09. This is one of my slowest marathon result but I don’t care.

In Boston I proved I’m a good runner, I don’t need to prove myself again. And there are many chances to run London Marathon in the future. This London Marathon was my 10th road marathon and 3rd world major marathon, which is a little milestone for me. This is marathon running –  maybe the process is not very enjoyable, but I’m always happy and looking forward to the next one after finished.

The coldest Boston Marathon in 30 years and the hottest London Marathon in history, I did them in the same week. I was unlucky to meet these extreme conditions but lucky to witness history. The 16th week of 2018 is unforgettable.

I will never care about the race day weather in the future. 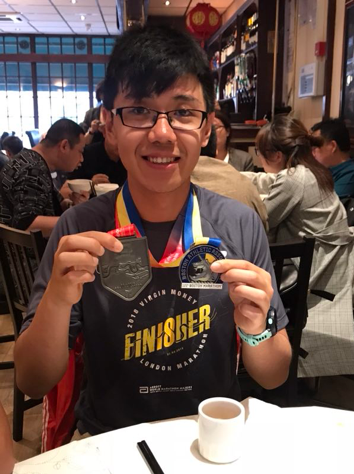 Post Views: 2,093
Want to join the LUCA News team? Click here to find out more.
About James Findon 161 Articles
James is the founder of LUCA.
Website