The Beer Mile World Classic (BMWC), held by co-founders Katie Williams and Nick Mcfalls, is being held in the UK this year at Allianz Park, Saracens Stadium, 10am – 6pm on the 31st of July.

The event gathers Beer Mile runners from Europe, USA, Australia, and Canada to celebrate a passion for athletics and good old-fashioned craft brew (basically the race is an excuse to get smashed and run like the wind). The BMWC is split into four laps, with runners having to consume 1 beer (355ml at 5%ABV) per lap. It is an open-entry event so anyone can compete, and there are other races including a fun run, a mile relay and 800m relay. To make it more challenging, there’s a “Chunder Penalty” for those who can’t take their liquor, whereby runners must run an extra lap if they bring their alcohol back up. 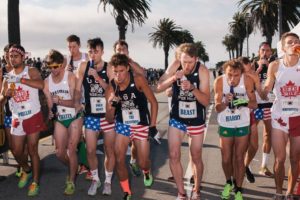 Williams emphasises that this event is like a mini Olympics for the everyday person, but with a cheeky twist:

The BMWC of 2015, in San Francisco, was the first race between record holders from 10 different nations. At this race, the official BMWC record was set with Canadian Lewis Kent winning the title of ‘Fastest Male Beer Miler’. He defended his title at the 2015 Austin FloTrack Championships and made a new PB and world record of 4.47. ‘Fastest Female Beer Miler’ was also set at the 2015 FloTrack Championships by American Erin O’Mara with 6.08. The speed drinking phenomenom has been so popular in the USA over the last few years that it has been featured on ESPN, Ellen Degeneres’ show, and in The Wall Street Journal.

“Most of us are 4:15 milers going against 3:55 milers but we can drink beer faster and some of us can beat the best runners,” Kent has been quoted as saying. Well, you heard it from the champion himself: being fast at both running and drinking is what makes the difference. So be sure to practice your chugging techniques beforehand.

Although informal beer miles have been taking place since the 1950s, John Markell and his teammates from Queens University in Kingston, Ontario, Canada, were the first to make the races official with their Annual Collegiate Beer mile races dubbed as the ‘Kingston Classic,’ starting in 1989. They created the Kingston Rules in 1993, consolidating all Beer Mile information for future races. John Markell moved to San Francisco in 1997 and joined the West Valley Track Club, where he met Williams and MacFalls and helped them organize the BMWC to bring the race to larger audiences.

Considering the current global and national public climate, a day of festivities to encourage unity, good sportsmanship, and comradery is exactly what’s needed. 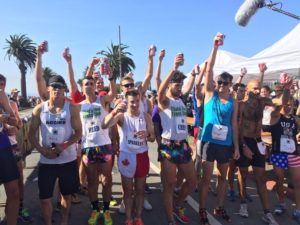 So Brits, it’s time to grab your trainers and beer, welcome 2016’s competition, and show the world what we’re made of!

Registration is open to anyone so sign up to give it a go! It is £25 for participants and free for spectators. Check out the BMWC website here for more info, 2015 pictures and directions to the event.

King’s Athletics and London City AC will co-host a new relay competition in London next summer. The competition, called ‘London Relays’, will see athletes compete across a variety of different relay events in a one-day championship on June 10. Although the exact format of the relays have yet to be announced, it is understood the event takes inspiration from Usain Bolt’s Nitro Games and will therefore seek to offer a thrilling programme of different relay events. The one day championship event will include a mixture of sprint, distance, mixed and medley relays in different […]