Race is a biopic which recalls the life of American athlete Jesse Owens (1913-1980) and the drama around his participation in the 1936 Berlin Olympics games. The 1936 Olympics fell during a time in which African Americans faced segregation and discrimination within the United States as well as in Germany, the latter of which was related to the rise of Nazism. At 134 minutes in length, Race is an endurance test but is worth watching for its depiction of Jesse Owens journey to win 4 gold medals at the Olympic games, which served as a powerful rebuttal to the Nazi’s hopes of displaying ‘Aryan superiority’.

The film bypasses Owen’s childhood and Owens, played by Stephen James, is first introduced to the audience at age 20 as he prepares to attend Ohio State University in 1933. Whilst at university, Jesse firmly establishes himself as a track and field phenomenon, winning a record of eight individual NCAA (National Collegiate Athletic Association) championships. The script, written by Joe Shrapnel and Anna Waterhouse, focuses on Owens’ relationship with his coach Larry Snyder. In rather cliché scenes, we see Snyder as the tough but impassioned coach and initially the two did not get along, with Snyder setting high expectations for Owens that he struggled to meet. But Snyder also prepared Owens for the Olympic games and handling the pressure of the event. Keeping with one aspect of the title, the script also tackles the racial issues that Jesse Owens faced whilst at university. A locker room scene in the film shows a football player telling Owens and teammate that they have to wait to shower until the football team, made of only white players, is done. 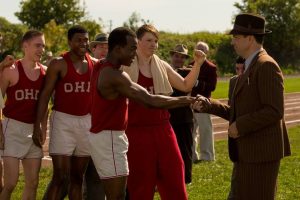 The film, juggling two different stories in parallel, then shows the debate within the American Olympic committee on whether to attend the Olympics or not. The key figures in the debate are president Jeremiah Mahoney, who advocated staying home, and Avery Brundage who did not, stating that “politics has no place in sport”. Brundage believed that the “American people need champions to remind them of what they are capable of” and was sent to Germany on behalf of the American Olympic committee to ascertain whether the German Jewish population were being treated fairly. With an interesting twist to the story which I will leave you to discover, Brundage concluded that they were. With America agreeing to attend the games, the next debate is seen with Owens himself; as a prominent figure among the black community, Owens must make the right decision as an athlete and a black man. After being personally asked by an official of the NAACP (National Association for the Advancement of Coloured People) to boycott the 1936 Olympics to send a message of solidarity to the persecuted minorities in Germany, Owens’ decision became even harder. Knowing that emerging victorious would crush Hitler’s views on Aryan supremacy, Owens had to find the courage to believe that he could dominate. Although the film is rather muddled and poorly written in places, with critic David Sims stating that “too often, Race’s script seems merely content to check the biopic boxes without fully fleshing out its subjects”, I believe these two significant events were two of the better written narrative threads.

Whilst filming at the Olympic Stadium in Berlin, Race grips the audience again by recalling aspects of the games and Owens’ life that are not common knowledge. We get an insight into Owens’ unlikely friendship with the German long jumper Carl “Luz” Long. Long showed great camaraderie towards Owens throughout the competition, in particular during the qualifying rounds. Owens had recorded two fouls and was nearly out of the competition, but Luz came to the rescue and advised Owen to jump from behind the board to ensure he got a distance recorded. Owens later admitted that “it took a lot of courage for him [Luz] to befriend me in front of Hitler,” going on to say, “you can melt down all the medals and cups I have and they wouldn’t be a plating on the 24-karat friendship I felt for Luz Long at that moment.” I believe it would have been beneficial for the movie to give this story more attention, exploring the German government’s reaction to the befriending and whether the friendship remained after the games. Rumours suggest that Long, Germany’s poster boy for the games, was enlisted into the German army as punishment for his actions. 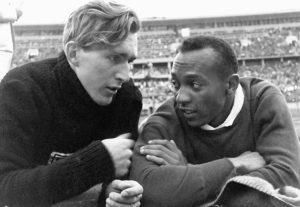 Another story that deserved more coverage in the film was the participation of the American Jewish athletes, Marty Glickman and Sam Stoller. In the Race movie, we see Glickman and Stoller benched from the American 4x100m relay team after German Minister of Propaganda Joseph Goebbels threatens to expose his business deal with the American Olympic Committee member Avery Brundage. The two runners were replaced by Owens and Ralph Metcalfe. A number of reasons were given for the change, some which contravene the reason presented in the film. Speculation arose that Brundage sympathised with the German plan for the games and didn’t want to add to Hitler’s embarrassment by having two Jews win gold medals. Glickman believed that Brundage and Coach Dean Cromwell were motivated by anti-Semitism (like in the movie), while Stoller didn’t think anti-Semitism was a factor. However, we can conclude that both men were extremely disappointed that they didn’t get to participate in the relay.

The film ends without really exploring Owens’ life post-Olympics but we do get a small insight into his treatment after the games back in America. The audience expects the struggle Owens faced in Germany and Hitler’s personal treatment towards Owen, but what we didn’t expect was the cold treatment he received from President Franklin Roosevelt. Owens’ achievements of 4 gold medals from a single Olympic games was never publicly acknowledged or celebrated by the President. Race is very good at showing what Jesse Owens did as an athlete but rather lacks the personal description of Owens, making it, in my eyes, a movie more fit for a history classroom rather than the cinema. But, why not watch the trailer and decide whether its worth watching for yourself!