We’d been together for so long. We’d done so much together. We’d been places together, seen places together. I thought our partnership was strong, was unbreakable, and that our bond would stand the test of time. But nothing lasts forever, I know that now better than most.

Looking back, I should have done more for you, protected you better, cared for you better. The signs were there, the discolouration, the pain, you just didn’t feel the same. But this isn’t just my fault, you needed to tell me when you were hurting, when it was time to stop. You tried, I know you tried. At times the pain was unbearable. 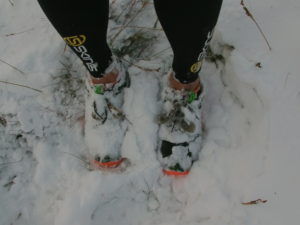 In those moments I knew that nothing would be the same again, that things couldn’t just go back to the way they had been. We both knew what we had to do, we entered the race together, the two of us, and we needed to finish together. Nothing would stop us. Part of me wanted to stop, to change socks, perhaps, or at least smother you in vaseline. But the other part of me, the stronger, crueler perhaps, part of me knew the only way to finish was to go on.

And when it was all over, in that moment of bliss crossing the line, you were the first thing I wanted to see. Peeling off my layer of protection I hoped and willed that you’d be alright, that things would be salvageable; that things could go back to how they were before.
That night I finished, I lay there; exhausted, too tired to care for you. For the first few weeks things seemed fine, the pain receded and the swelling lessened. It might fix itself, people said. It looks alright, friends said. But we knew the truth.

The right toenail was the first to go. That hurt. But it was for the best. The right could go because the left would stay- but I was lying to myself. In the end the left went the same way, except with less pain this time. I was hardened to it now, losing rightie changed me. What more damage could be done? And now I am left without either. Alone I run.

Post Views: 1,344
Want to join the LUCA News team? Click here to find out more.
About Seth Kennard 8 Articles
Runner, cyclist, climber, vet student and winner of second best pizza in year 8 cookery competition. I run any distance from 1500m (not very well) to 160km (with only slightly more success). Only truly happy in the mountains, and only then if I'm at the very top.