This year has been full of first times for me: first time visiting Africa, first time climbing the world’s tallest freestanding mountain, and hopefully the first and last time I’ll experience altitude sickness!

I decided that I wanted to do something worthwhile in my summer of 2016, so when I saw posters around University offering the ‘Climb Kilimanjaro Challenge’, I thought it was the perfect opportunity for an adventure. It was organised through the Anza charity, based in Moshi, who I volunteered for in the week after the climb.

Getting ready to climb Kilimanjaro was not the easiest of tasks. What do I wear? How fit do you have to be? And really, nothing can prepare you fully for the gruelling five day trek that climbing Kilimanjaro involves. The exotic terrains are a perfect distraction for the challenge though: the humid rainforest and dusty paths in the moorland made for an exciting journey.

As a member of the Roehampton Athletics team, I went to the weekly long-distance training (3-5km) we did to improve my fitness and endurance during the University months coming up to the trek. I also went to the gym to do circuits for my core and interval training on the treadmill. Then in May, I camped in Scotland with some friends and tried my hand at climbing my first mountain: Ben Lawers. The views were astounding and motivated me for the Kilimanjaro climb. Applying for challenging events ahead of time definitely helps give purpose to your workouts. It is a lot harder to make excuses to put off exercising when the clock is counting down!

Later in summer, I arrived with three others from the climbing team in Tanzania a couple of days before the trek, with all our gear piled high on our backs. Thankfully, the chaotic bustle of Moshi’s urban town calmed down as night approached and we crashed out at the community-run Haria Hotel to overcome our jetlag. We were later transferred to The Keys Hotel (both highly recommended).

To begin the journey up Kilimanjaro, my group left the hotel in the early morning to go to the Kilimanjaro entrance. Our team: Lene, Emily, Ellie, Daniel, Ronnette and I, embarked on the Marangu route. It is nicknamed the ‘Coca Cola’ route by the locals because of the sleeping huts provided which sell coca cola and candy bars. This is considered the easiest of the seven routes: Marangu, Machame, Lemosho, Shira, Rongai, Northern Circuit and Umbwe. Due to this, it is most popular with tourists. However, “it is estimated that only a quarter to a third of the climbers on this route summit because five days does not allow for sufficient acclimatization”.

‘Easy’ is a very misleading description, but many of the locals have spent their lives going up and down the mountain for work so it was like a walk in the park for them. We would often see them: young and old men, and a few women, carrying hiking packs and a giant bag on their head in perfect balance. They made our walk look like a snail’s pace.

Before we set off, porters took our 60 litre backpacks, then we entered the rainforest through a pointed, wooden arch.

The further we walked, the darker and more humid it became, with vines hanging among the trees like a scene from the Jungle Book. The sound of a waterfall echoed around us and there was an optimistic atmosphere from excitement at our wild surroundings to keep us energised. Queue the Lion King music! People on the trail greeted everyone with a mutual comradery, with the jolly Swahili phrases: ‘Jambo’, and ‘Mambo’, meaning ‘hello’ and a slang ‘how are you?’. After which we’d all reply with Jambo or Poa, in an equally sing-song tone.

Lene and Daniel hopped up and down as they tried to get rid of the stray ants that had taken a liking to them. A large colony of Safari ants formed a bridge-like crossing on the narrow mud path and my fellow climbers had paused in awe of such a spectacle of nature. Our guide, Deus, looked on in knowing amusement as they realised their mistake of disturbing the wildlife. Some of the colony of ants had already rapidly begun breaking off to investigate what was interrupting their march.

Lene swatted one off her thigh, “It bit me. Are they dangerous?”. Daniel leant on her while desperately removing his shoe to find an angry intruder.

Deus shrugged in his chilled temperament that was common in Africa, “They aren’t the Red Fire ants, you’ll be fine.”

Daniel put his hiking boots back on, enthusiastic to continue. We applied more mosquito repellent and trudged on. Ellie, the most experienced traveller of our group, took this as inspiration to terrify us with her encounter with a Giant Centipede in Thailand. It was a wild, foreign world within the Tanzanian rainforest. 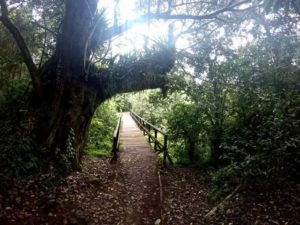 After 3 – 4 hours of uphill walking we reached the first camp: the Mandara Huts, 2,720m above sea level. The Marangu route is the only route that offers huts, which is probably why it is the most popular. I definitely did not expect actual beds on the trek – such luxury! The Howling monkeys cawed like birds throughout the night, and it echoed in the rainforest surrounding the camp. I felt like an explorer listening in, exceptionally lucky to be privy to wildlife conversing in its natural habitat.

The second day involved trekking through moorland and dusty paths that yoyo-ed up and down. To prepare us, our chefs served a mouth-watering, three course breakfast with maize porridge, pancakes, omelette, toast and fruit. Unfortunately, loss of appetite due to the altitude was already affecting me, but I forced myself to eat what I could. The porters were dotted around the camp chatting happily in the early morning mist, preparing for their departure with our gigantic backpacks. We set off on the walk with recommendations to drink between 3 – 5 litres of water a day, so our water packs with drinking nozzles were a god-send during the 6.5 hour trek to the next camp: the Horombo Huts. This was clustered on the brink of a cliff with nothing but fluffy pillows of clouds spreading for miles, indicating the great height of 3,705m above sea level.

It was during this day that it began to dawn on me the multitude of the climb and I was starting to feel in over my head. Our new guide, Prosper, entertained us with anecdotes from his past 18 years experience taking people up Kilimanjaro. He pointed out common trees like the giant groundsels and introduced us to the sour berries. While similar in shape to blackberries, they were an acquired taste. Locals ate them for quick energy while passing the bushes on their trek, but we screwed up our faces in response to the shocking, sharp burst of flavour.

After our lunch break, overlooking the vast landscape and with Mount Mawenzi looming behind us, we packed up to make the last 2.5 hour climb for the day. Ellie had developed what we later realised was severe altitude sickness and stayed behind with Prosper to go slow, while the assistant guide, Joseph, led us on. My breathing came faster as the air was thinning and near the end we stopped several times to catch our breath. Orange dust flowed in front of us as we disrupted the empty paths. We passed a rickety wooden bridge and made for the arched huts at the top of the hill.

I was feeling confident at dinner, eating more than I had previously without nausea, and the enthusiasm of other groups dining made me optimistic. However, we were not having an acclimatisation day, and I would soon find out how vital that was for success. We went to bed in the attic bunks above the dining area. I tossed and turned for a while, sweating and shivering simultaneously. Nausea eventually overtook and, needless to say, it was a torturous, sleepless night. As the next day’s trek involved 8 hours of walking across nearly 6 miles, and Ellie and I were still throwing up, we decided to stay behind and wait for the victorious four to return so we could climb down.

The Kilimanjaro National guards and our waiter, Moses, looked after us well. Mount. Kilimanjaro trips provide vital jobs to the community. According to recent data, “60% of Kili trip revenues stay in Tanzania and directly affect over 9,000 people”. Kilimanjaro workers wages are higher than the national average wage, but still seem so little for the exertion of climbing a mountain each week.

Even so, a conversation with Prosper informed me that Tanzania’s tourism industry has jumped in popularity over the past decade. It was inspiring to see the efforts and enthusiasm of everyone that worked along the trail.

On the morning of the climb down, as per tradition, our team of porters, chefs, and guides joined together to sing the uplifting celebratory song: ‘Jambo Bwana’. Everyone clapped their hands along with the beat and sang proudly. The happy melody had become like a background theme tune as Prosper had been singing it to us during our climb, so we joined in.

We descended slowly, ‘pole pole’ as they say, but were determined to make it back in good time. The orange dusted moorland eventually gave way to trees and the Mandara huts, where we rested for a bit. The walk down was a killer on your feet and knees, but we persevered. Fellow climbers, proud smiles across their faces, gave us encouragement, “Nearly there now.” Closing in on the passageway to the jungle entrance, the hallelujah moment was upon us as we passed through the light that signalled the end of the dense jungle.

I now walked like a penguin and was scared to see the state of my feet, but it felt worth it. The journey and memories made would stay with me forever, and we sat together bonded by our experiences and the endeavours we endured.

As we boarded the bus to leave, our team waved us goodbye, with the happy faces of our guides: Prosper, Joseph and Deus, at the front.

Are you looking for an adventure? Whether you seek to run a 10km or test your limits with treks such as Kilimanjaro and the Macchu Picchu trail, start planning now to set up your goal for 2017. There are many opportunities, and as long as you do plenty of research and train hard, the world is your oyster!

Mount. Kilimanjaro Guide – one of the best, most accurate resources I’ve come across for choosing your route and planning a climb.

Time Outdoors – full list of worldwide challenges and adventure holidays to suit all abilities, plus advice on gear and clubs.

STA travel – great for adventures on a budget (but ensure you research the individual adventure as cheap may not be the best option).